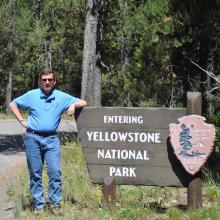 Dr. Gramann is a former associate editor of Journal of Leisure Research.

He has served as an advisor/consultant to numerous programs in the NPS, other federal agencies, corporations, and nations. In 2005 and 2006, he provided technical oversight to the NPS Advisory Board, directing its development and evaluation of pilot projects to increase physical activity by visitors to national parks.

He has had significant involvement with social science issues in the NPS Alaska Region and with the NPS Comprehensive Survey of the American Public.

In 2010, he received the Secretary of the Interior's Unit Award for Excellence for his work with the NPS Social Science Program.

In 2015, the George Wright Society honored him with its Social Science Achievement Award for cumulative accomplishments in furthering the application of social science research to the management of parks, protected areas, and cultural sites.